We are always researching proven ways to try and avoid cancer.  There are so many different ways cancer can wreak havoc on a body, from brain cancer, to lung cancer, to bone cancer.  We don’t want any part of it!  If there is one more thing we can implement in our daily regimen to keep this fiend at bay, we are all ears.

There are three amazing things that tea does to cancer:

Wow!  Do you think cancer likes tea?  I don’t think so!  We want to ingest what cancer does not like.  And one thing is tea, especially GREEN TEA. 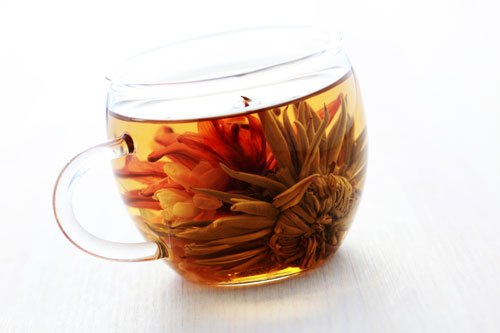 How does tea kill cancer cells?  Due to the antioxidant EGCG (Epigallocatechin Gallate), tea works as a free radical inside the cancer cell, causing cancer cells to self-destruct.  That’s right – commit suicide. How great is that?! Green tea contains the most EGCG due to its low fermentation, and has been found to be over 100 times more effective in neutralizing free radicals then vitamin C, and 25 times more powerful than vitamin E.  The EGCG in tea also does not harm surrounding healthy cells, which drugs such as Vioxx and Celebrex tend to do.

How does tea block cancer cells?  By inhibiting the overproduction of an enzyme called COX-2 (cyclooxygenase) which is a cancer-causing enzyme that acts as a catalyst to cancer growth.  In excess, this enzyme has been implicated as a factor in many diseases. Tea also blocks the enzyme DHFR (dihydrofolate reductase) which is yet another enzyme.

It has been noted that breast cancer tends to spread less rapidly on women who drink five or more cups of green tea a day.  In fact, from brain cancer to leukemia, from lung cancer, to stomach cancer, colon cancer, and prostate cancer, cancer studies in regards to tea are indeed showing positive results.

Next time you relax with a cup of tea, you can confidently exclaim, “Take THAT, cancer.”