One excellent benefit of tea is that it is a great alternative to coffee, for that morning pick-me-up to get you going for the day.

An 8 ounce cup of coffee contains a whopping 125-185 mg of CAFFEINE while an equivalent cup of tea contains only 15-50 per cup. 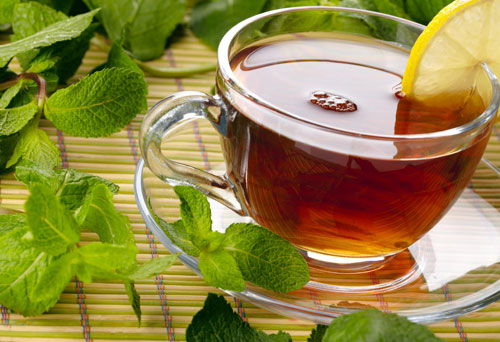 What is also interesting to note is that fermentation decreases caffeine content, so GREEN TEA will contain more caffeine than both OOLONG TEA and BLACK TEA, with black tea typically containing the least amount of caffeine.  WHITE TEA will have the most caffeine since it is the least fermented of the teas.

But caffeine content alone is not the full story.  There is another player involved that significantly affects the way caffeine affects you and me.  It is called theanine, a naturally occurring amino acid protein found almost exclusively in tea which actually counters the side effects of caffeine in tea, such as headaches and raised blood pressure. The relationship of caffeine and theanine working synergistically this way was actually discovered during a 2007 study conducted by Doctor Foxe.  Basically theanine decaffeinates tea naturally.

Theanine is a natural relaxant and has been found to:

• Increase concentration
• Enhance the ability to learn and remember
• Promote alpha brain waves, putting you in a relaxed yet alert state without causing drowsiness
• Increase dopamine levels in the brain, which helps relax the mind
• Promote a more restful, sound sleep as it helps the mind stop racing

Theanine seems most effective when you are stressed and your mind is preoccupied with many thoughts.  It helps to relax your mind, allowing you to focus on the task at hand.  In our busy modern lives, this is much needed.

The theanine in tea is why a cup of tea is noticeably more calming and relaxing than a cup of coffee.  Many people reach for a cup of coffee when they need to concentrate.  People with flagging focus, however, just might get more bang for their buck with a cup of tea.

So there is a rule that the more caffeine a tea has, the more theanine it will contain as well.  As a result, even though green tea has more caffeine than black tea, if you are drinking a high quality tea, it will not appear so. Green tea, thanks to the caffeine and theanine link, will be calming and soothing.  And even the white teas, such as Silver Needle and While Peony, which have the most caffeine, will still have a calming effect.

Loose teas also taste much better than tea bags, which are made with the lowest grade of teas available, called tea dust.  Tea bags can also only be used once and then discarded.  Infusing a tea bag more than once gets very unsatisfactory results.  High quality loose teas, on the other hand, like the teas we provide, can be infused a few times and still taste good. In fact, in Asia this is a common practice.  This also saves money!

If you are still interested in decaffeinated teas and even how you can decaffeinate your own regular tea at home, please see our article on CAFFEINE AND TEA.